Here's how TheGrefg smashed the Twitch viewership record and exactly how impressive the numbers behind it look.

History was made on January 11 as Spanish streamer David "TheGrefg" Martinez shattered the Twitch viewership record with nearly 2.5 million people tuning into his stream at one time. The previous overall record was set by tournament organizer Eleague at 1.1 million, while the previous individual record was none other than TheGrefg’s at 639,000, which just goes to show how massive this new record is.

While the popularity of the streamer cannot be disputed, it’s not the only deciding factor when it comes to setting this record. The true hero was the marketing strategy behind it, and how Martinez and everyone else at play came together to create the perfect ground for a record-setting moment.

What was TheGrefg’s marketing strategy?

To set the biggest record on Twitch, Martinez would need more than just his usual fanbase and promotion tactics. It would require arguably one of the biggest and most widespread marketing campaigns to date, which spanned across multiple sectors and platforms. Twitch may have been the end result, but TheGrefg’s announcement and new skin was just about everywhere in the week leading up to its launch.

With the help of Fortnite and Epic games, the launch was always going to be popular. With tens of millions of followers on social media, the gaming titan always draws in a large crowd. To add to that, TheGrefg was set to become a skin in the ever-popular game - being only the fourth real-life personality to be honored in such a way.

This initial buzz was then amplified by Martinez and a selection of other parties. Firstly, his own fanbase would provide the usual 100,000 or so viewers his stream gets, and we have to add his millions of social media followers and YouTube subscribers to that. He’s also the owner of an elite Esports team, Team Heretics, which certainly helped. He used all of his personal tools to hype up the skin reveal, including countdown streams and videos, social media posts, leaks, and more.

However, some of the biggest influence came from outside parties that worked in tandem with his own marketing efforts. The biggest names in gaming combined to also build up the excitement and anticipation, including the likes of Epic Games, major streamers, elite esports teams, and even Twitch themselves. 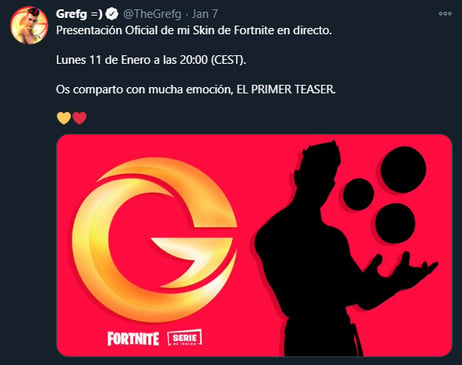 (one of many promotional teasers for TheGrefg's skin reveal)

For example, Twitch’s own support page stated on social media that they are worried about the skin reveal, as the number of people watching will surely be a strain on the servers. Even if you’re not a fan of Fortnite (or gaming in general) that would certainly catch your eye and interest.

All of this was then combined into an incredibly effective marketing effort and, if you were a gaming fan, almost anywhere you looked, you’d see something about TheGrefg’s upcoming skin reveal stream.

There was a wave of information, announcements, and teasers drawing in more viewers by the day from all over the internet. Twitter, YouTube, Facebook, Instagram - if you can think of a platform, there were multiple sources and types of posts there.

What really took it over the top, however, is that while it was about Fortnite, there are only so many fans of the game, so the marketing also took a shift into making it an event you had to see. Twitch’s own support was worried about it, your favorite esports team were taking a look, your favorite streamer was trying to get in on the action - by making it an event bigger than the game and something that fans had to see, it became just that.

A look at the impressive numbers behind TheGrefg’s record

Even a quick look at TheGrefg’s numbers for his reveal stream is mind-blowing. We know that he shattered the record, but the strength of his campaign was so incredible that he already broke the old record just by turning on his stream on the day of the reveal.

After just 14 minutes of streaming on Jan 11, TheGrefg had already reached a record-breaking 700,000 concurrent viewers and maintained this for almost three hours. As his broadcast boomed, he held over 2 million viewers for around 30 minutes and eventually reached the peak of 2.47 million concurrent viewers. 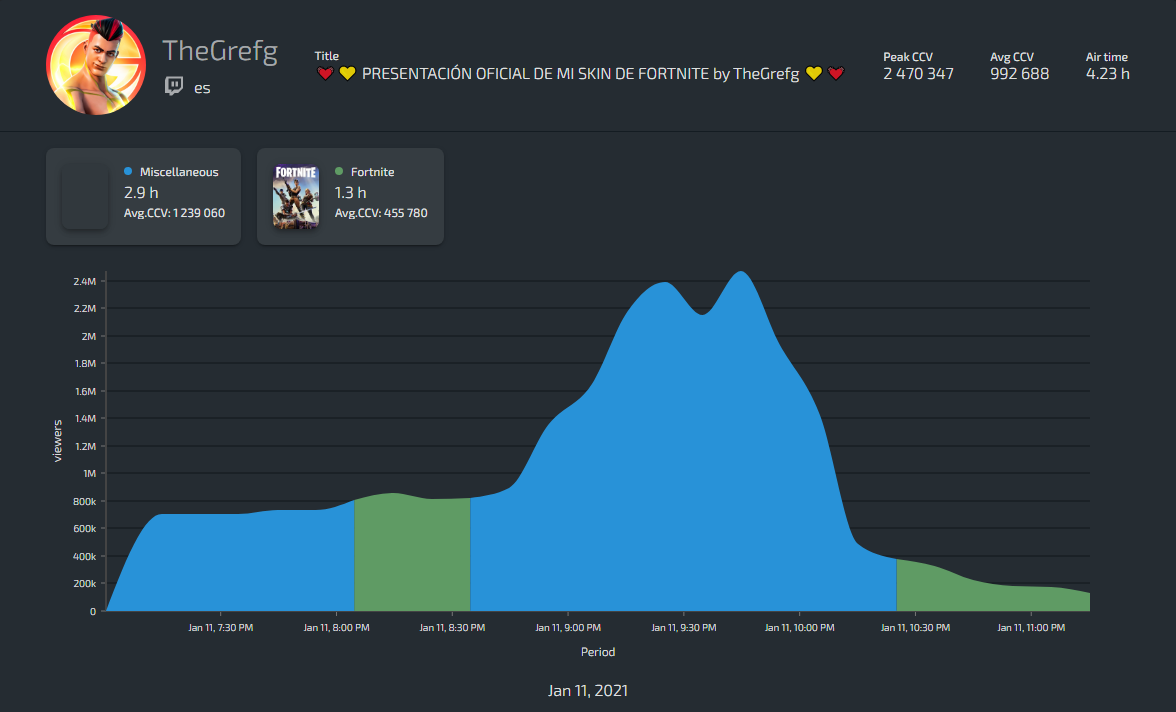 This also adds up to over 4 million hours watched over just four hours of streaming and over 400,000 followers gained - very likely the biggest numbers we’ll see in relation to a Twitch stream for some time.

Another interesting stat that the numbers reveal is the very short lifespan of the viewership (although with the aim likely being the record, this is still a massive success). Incredibly enough, after reaching the 2.4 million peak, it took only 30 minutes for the majority of the crowd to dissipate, with TheGrefg losing around 2 million viewers just 30 minutes after his reveal, including a whopping 1 million loss in just 10 minutes - that’s got to be another record.

Overall, the numbers show this was definitely a historic Twitch moment, which came as a culmination of the effort of quite a few of the biggest parties in the industry.

Shroud and Dr Disrespect are back! Two of the biggest streamers return on Twitch and YouTube respectively - making waves in the streaming world.

Streaming is a tiresome and thankless job, but Lurkit is here to make it slightly easier.