If you’re a fan of gaming or esports, you’ve no doubt heard of Apex Legends - Respawn and EA's take on the battle royale genre. The game quickly gained popularity after its surprise launch in early 2019 and has since thrived, becoming one of the most popular multiplayer titles out there.

There are a few reasons for this and it was no doubt helped by adding some unique elements to the genre. However, one of the biggest reasons it made headlines was due to its marketing efforts, which included a launch that came basically out of nowhere and a key focus on user generated content.

Let’s take a look at how Apex took the market by storm thanks to its launch and UGC, as well as how it has utilized user content since to stay on top.

To the majority of fans, Apex Legends came out of nowhere. There were no major marketing efforts for the game prior to launch, no worldwide advertisements, or really any public word to speak of. For a game backed by a triple-A studio, this was something that hadn’t really been done before.

Instead, Respawn and EA invited around 100 of the biggest content creators out there to their studio just a few days before launch. This would be the focus of their marketing campaign - capitalizing on the content these users would generate.

The influencers got to try the game early, but news of exactly what the game was, was still being kept secret from the public. Respawn began to utilize UGC from this first interaction, getting the creators that had seen the game to throw out small teasers on their social media platforms.

This created a fair amount of hype, however, the fans didn't know for what exactly - all they knew is that something big is coming. Then, a few days later the game launched, with all the creators immediately being unleashed and playing the game. Apex immediately took over Twitch and YouTube, with various forms of UGC quickly being created by the influencers who knew of the game, other influencers big and small, as well as gamers who had instantly become fans.

The game instantly became a hit, reaching over 25 million players in its first week and 50 million within the first month.

How Apex Legends has continued to utilize UGC

Even with a successful launch, games need to keep up their marketing efforts to draw in new players and keep their user base fresh - with a stagnant base of players, the game would slowly but surely die out.

Apex has done an amazing job of utilizing user generated content to keep up their marketing efforts and continuously build in their success. They’ve stuck to their user-based philosophy, and while we do see some traditional marketing methods like online ads, promos, etc. a large chunk of their marketing is still focused on UGC.

This comes in a few forms, most notably by encouraging UGC with things like promotions or special events on Twitch and YouTube, as well as sharing and building up their fan’s content on social media.

One of the best examples of the former is any new content launch for Apex Legends. There are always influencers covering it, from YouTube videos pre-launch, to live streams during and after each content launch. Some influencers are specifically hired to create certain content for these events, while others simply do it because it’s of great benefit to them, thanks to Apex creating a space for influencers to thrive.

Ever since the game’s launch, influencers would have felt ‘welcomed’ to the game, knowing that a big focus of Apex Legends marketing is on influencers and that by creating content for the game there’s a chance that the creator could be a key part of a campaign going forward. This created a cycle of positive momentum for both sides - more influencers wanted to create content for Apex, knowing Respawn and EA could use them and it would boost their popularity, while Respawn knew that by enabling creators, more people would create content for the game, which would generate more overall viewership.

This is also further boosted by the Apex Legends social media pages. All of the game’s social media is plastered with user generated content, which includes a wide range of things, from simple retweets of someone’s video, to sharing and commenting on cosplay, or even grabbing highlights from other websites like Reddit and taking the time to share them. 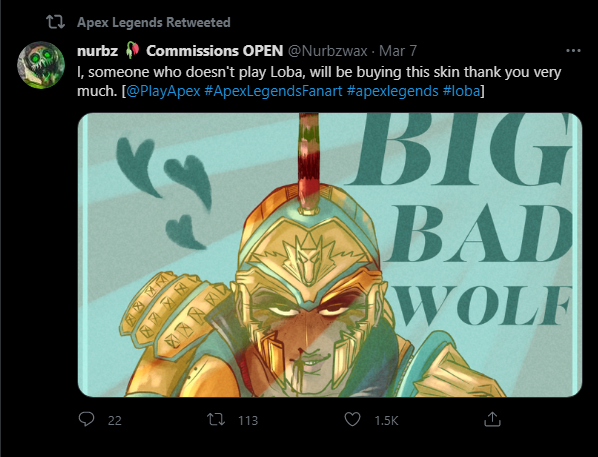 Much like with influencers, sharing and interacting with content on social media promotes more content and attention to the game. Having users who want to create cool fanart, cosplay, and other content is only beneficial (they wouldn’t do it for a bad game after all) and by sharing the content, it only encourages more, which can in turn attract people to the game.

Overall, Apex Legends’ focus on user generated content has paid off tremendously and been a huge factor for the game’s success, all the way from launch and going forward. By encouraging content early on, a ton of content is now being created, which serves as a huge wave of marketing that would otherwise be incredibly expensive or time-consuming to create.