User generated content has become a focal point in gaming as it has become a key tool that developers can use to enhance a game. We’ve even seen some games become huge hits just by making UGC their focal point, both in and out of game.

Games like Minecraft, Garry’s Mod, and Terraria were all created with user content in mind, so much so that the core gameplay elements revolve fully around the players creating their own content. These games are known as ‘sandbox games’ - essentially games which are like a child playing in a sandbox, the user can do anything (to an extent) and all that matters is their imagination. To one person it’s just a pile of sand, while to another it’s a castle waiting to be built.

For these games, and Terraria specifically, the user generated content doesn’t stop in-game, it extends outside of the game too with fans creating a variety of Terraria themed content. Thanks to the vast popularity of social media and video content platforms, it’s incredibly easy for fans to share their Terraria content. The developers behind the game, Re-Logic, have capitalized on this, integrating it into their marketing strategy, and here’s how they do it and why it’s so effective.

First off, it’s important to note exactly what Terraria is: it's an action-adventure sandbox game. The game is based around collecting resources and using those to explore a pre-generated map. Player’s start the game with nothing but their character and must progress using resources - for example they can ‘chop down’ a tree with their hands, then use the sticks to create a wooden pickaxe, this enables harvesting rocks, which can then be used to make more things.

The fact that it is a sandbox game means they can do just about anything, from fighting monsters, to building, fishing, gardening, and much more - it all depends on the player. The game also includes a storyline players can choose to follow, and varied forms of combat - giving it a bit of action and adventure alongside the sandbox creative nature.

All this is important because it means that the core portion of the game is the users themselves creating content, be it a new shovel to dig some dirt, or even building a giant castle. This is something that directly plays into the marketing around the game, as not only is user generated content created outside of the game by fans, it’s also a prevalent part of the game and can be used to show off the amazing things that are possible in Terraria.

User generated content plays a massive role in the marketing strategy behind Terraria. A vast portion of advertising and promoting of the game is based around UGC, from traditional adverts you may see on TV to online banners, online video advertisements, and even social media.

Re-Logic use Terraria’s inherent game design to promote the game as “your world” - each player gets their own world that’s unique to them, and they can do what they want with it. This advertisement is then supported by UGC. When it comes to something like TV adverts, they usually show off some incredible in-game designs and different user-focused mechanics to show what the content the players themselves can create.

This is a very powerful marketing tool, as it has huge potential for drawing in users. The option to manage and progress in your own world, doing what you want and how you want is uncommon in games. It’s also highlighted in advertisements by showing off what users can create, enforcing a sense of wonder, as well as a challenge - “could I do that?” or “I could make a better house” and other lines of thought are common when interacting with sandbox games. 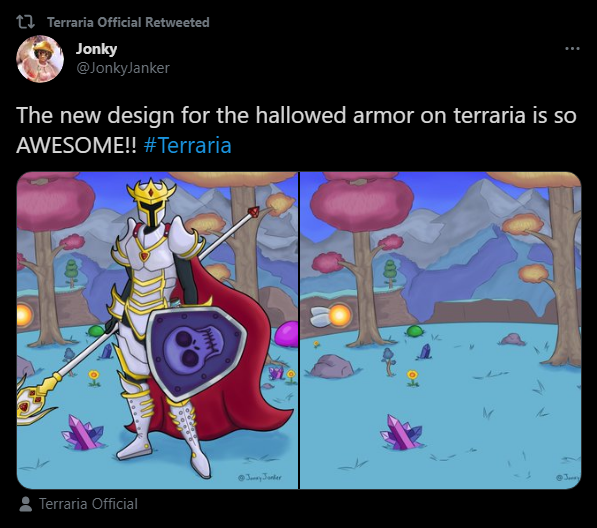 However, this isn’t the only way that Terraria’s UGC is being utilized, with social media being another key component of the marketing strategy. Re-Logic make great use of user generated content via social media, by making it a huge part of their social channels. The vast majority of their pages, like Twitter, Facebook, Instagram, etc. all have a good amount of UGC circulating through them daily.

Users upload content, share videos and live stream links, and talk about Terraria daily, which is then used by the devs to promote the game. They interact with the content on the official Terraria pages, sharing, liking, and discussing a ton of different posts - there’s almost always fan art, memes, or some kind of fan-made video on Terraria’s pages.

This is an amazing way to generate buzz and attract more users, as it not only highlights current content, showing the amazing things that are possible in the game, but it also shows that Re-Logic care, and users can really shine by creating interesting content and sharing it.

What makes leveraging UGC so effective?

Making the most out of UGC can sometimes be as simple as retweeting a tweet, which then draws a ton of attention to the tweet and in return shows what interesting things are possible in the game. This is also very attractive from an economical point of view as a lot of the time user generated content costs the developers nothing.

Sharing a tweet, interacting with a comment, all that requires is a dedicated social media employee and some time, which should already be on the cards considering how important social media is nowadays.

However, the best thing about utilizing user content is that it promotes organic growth. From loyal fans to the biggest content creators, it always feels great to have someone care about what you’ve accomplished in game and who better to care than the people who made the game.

By utilizing UGC, be it through adverts, social media, or any other form you can actively encourage further content. For example, Terraria sharing an image of a cool creation: the user that made it will feel accomplished and want to make more, potential users who see it may be swayed to purchase the game to try and make something as impressive and have it shared, and other current users will have new ideas and maintain the player base.

Meanwhile, with more people making and sharing more content, there is more buzz about the game, which creates more growth in online mediums. Interacting with and utilizing UGC has the potential to create an exponential wave of growth, through cycles of content being created, found, appreciated, and created again.

A great way of taking control of your UGC is through using Lurkit's services - it's quick and easy to launch a campaign and have a plethora of various content creators interact with your game and begin creating content, with any guidelines you may want to set.

Tracking influencer progress and content is also very simple, with the Lurkit livestream analytics tool displaying just about every bit of data you may need while featuring very flexible filters. If you want to learn more about and get a demo of Lurkit's services, make sure to contact us.

By knowing what could go wrong, a marketing team can adjust as needed to ensure a higher chance of ROI success.

Splitgate launched into a massively successful beta period, and several factors allowed them to rise, fall, and proceed into a vast and unknown...

Game Publishing: Why You Must Research Your Game’s Target Audience Before You Launch

With your game soon to be published, it's time to consider your audience and who would be most likely to purchase your title. Researching your...