Gaming, and specifically media platform viewership, is a competitive and fast-paced environment. Other than a few key favorites, games can rise and fall in an instant, with popularity rarely being guaranteed.

Every week we see games go through wild changes, be it positive or negative, with some even rocking the foundations of the gaming world. Thanks to Lurkit's Game Insights, it's easy to track any changes in game viewership, and we offer a ton of data to track any game's performance.

Let’s take a look at which games made some of the biggest waves last week:

Biomutant Explodes Thanks to Strong Launch

One of the freshest game’s on last week’s radar was Biomutant. The game is a unique take on the RPG genre, combining an open, post-apocalyptic world with kung fu, guns, and... cute furry animals.

It’s all a bit different from the usual game we see, so there’s not much surprise that it garnered a ton of support and interest. Let’s take a look at the numbers behind its launch: 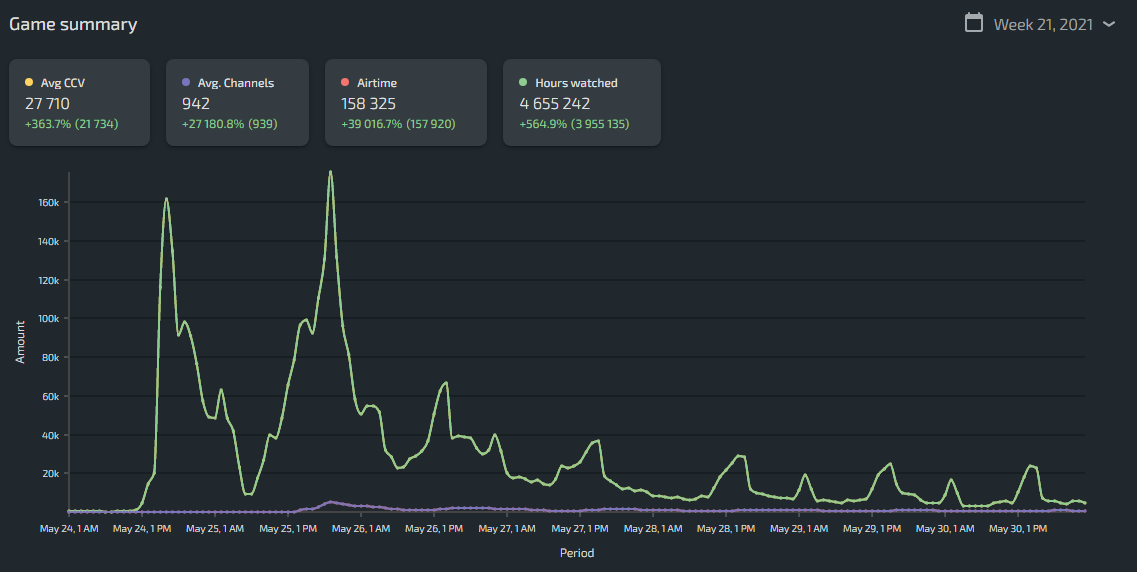 Overall, these are very strong numbers for a brand new game to Twitch. There’s a clear sign that there’s a big interest in the game and a Peak CCV of over 175,000 means that Biomutant did hit the top (or at least the front page) of the platform at some point.

However, we can also see that its numbers are dwindling. From huge peaks, the game often finds itself below even the 20,000 mark and if nothing is done soon to spice up the game, it may fall into the forgotten depths of Twitch.

Knockout City is another new face to the gaming world, having been released by EA on May 21. The game is a brand new dodgeball action brawler, where teams of players face off in epic battles. It’s fast-paced, competitive, and seemingly makes for a great party game.

As such, it’s also no surprise that it gained some popularity, with a few major Twitch streamers trying it out. Although, despite its great launch, it seems to be quickly falling out of favor. Here are its numbers from last week:

At first sight, this may seem like strong numbers, in fact, even the chart shows growth. However, it’s vital to consider the context here. The data compared is last week to the week prior, this means things like Average CCV and Hours Watched are only up 63-65%, despite having been streamed for four more days than the previous week.

There is an increase in Average Channels Live, which means streamers are arriving to the game, but their viewership is incredibly low compared to the previous week. Overall, Knockout City is in for a downwards trend, and the numbers next week will likely tell a grim story.

Rust is a game that is a great example of the potential extreme rise and fall that games can see on Twitch. Thanks to a group of influencers launching their own in-game server, Rust rose from the depths of Twitch to one of the biggest games on the platform.

They’ve now largely left the game, and we can see the effects as it has been slowly spiraling back to some very low lows. Let’s take a look at Rust’s numbers: 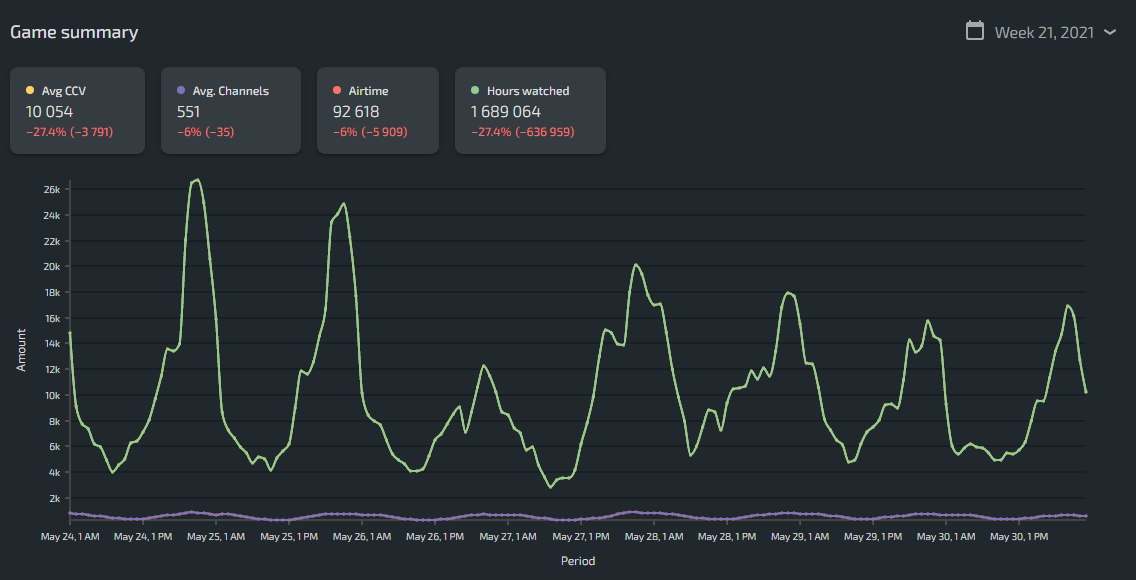 All of these numbers are in the red, with, most importantly, Hours Watched dropping by 27.4% in just one week - that’s a ton of viewership vanishing! This is also accompanied by a reduction in overall Airtime and the number of channels broadcasting, both falling by 6%.

The game seems to be continuing on a downward trend, and it’ll be interesting to see at which point it can stem the bleeding of viewership.

How Do These Compare to Other Launches?

Resident Evil Village was no doubt the biggest launch of the last few months. It's a continuation of the legendary Resident Evil game series, which dates all the way back to 1996.

Between the hype of a new horror game and the backing of a major organization like Capcom, Village was always going to be a huge hit. Let's take a look at just how big it was during its launch: 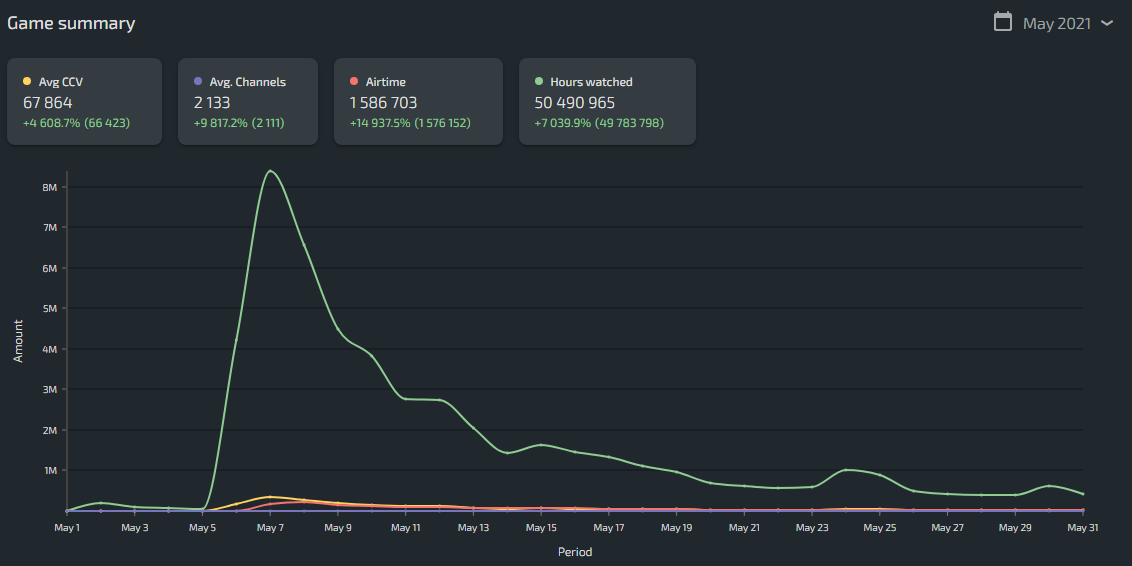 This includes over 35 Million Hours Watched in its first week, a Peak CCV of 349,362, and millions of hours streamed across thousands of channels.

Clearly, the game's launch was successful, but considering it's coming from a triple-A studio, huge numbers were to be expected. Meanwhile, a game like Biomutant showed strong numbers as well, especially earning around half of the Peak CCV of Resident Evil, despite being backed by a smaller studio.

Returnal is a new FPS roguelike game that appeared and vanished in a very short period of time. Published by Sony, exclusively for the PS5, its launch week was quite strong, but it quickly ran out of steam.

With 6.6 Million Hours Watched in its first week and a Peak CCV of 152,956, the game clearly had some hype around it. But, it saw very similar numbers to Biomutant and Knockout City, and has since faded into almost no viewership whatsoever.

New Pokémon Snap is the return of a Pokémon classic. It's a first-person photography game, where players take photos of Pokémon, rather than capturing and battling with them. It's another game with a lot of hype backed up by a huge studio. 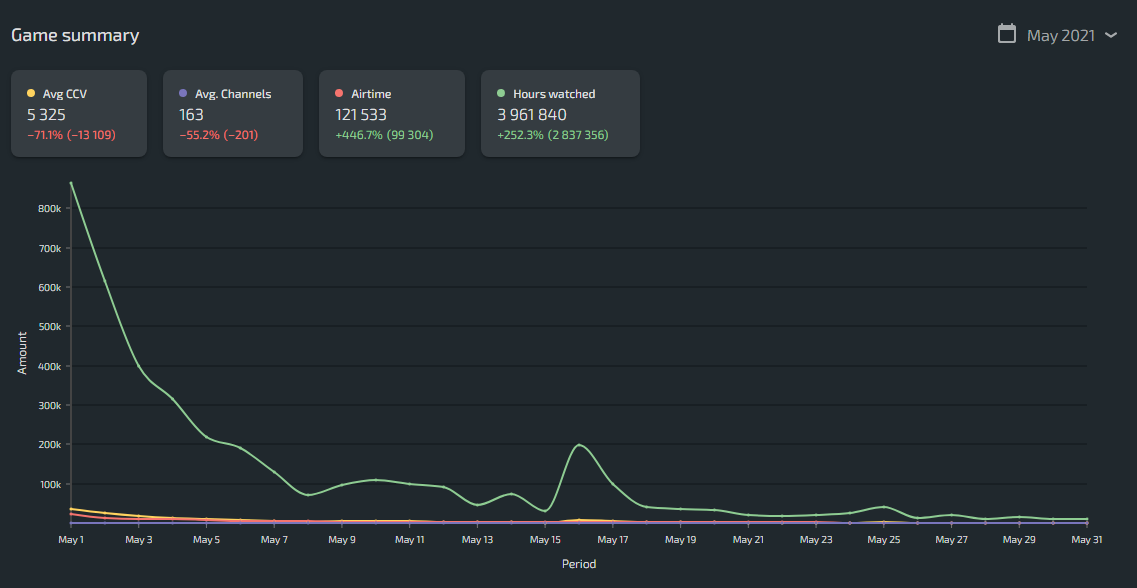 The numbers, however, don't really live up to expectations, with around 4 Million Hours Watched in its first week and a Peak CCV of 43,705, the game was outshined by even Biomutant, which didn't have the support of a triple-A publisher but still raked in massive peaks and more hours watched.

This is another game that was launched by a small developer and can be somewhat compared to the size of Biomutant, albeit a tad smaller. While Biomutant showed what can be achieved with hype and a strong Twitch presence, Hood, unfortunately, suffered a fate of being almost overlooked.

Hood: Outlaws & Legends failed to make much of an impact on Twitch, with just 1.7 Million Hours Watched in its first week and a not too shabby but very brief Peak CCV of 55,269. The game then slowly faded away, while the likes of Biomutant and Knockout City continued strong launches into at least the top few rankings of Twitch in their following week.

Lurkit’s Last Week in Gaming: Back 4 Blood, GRIME, and more