We saw an exciting week on Twitch last week, with some old-school titles making waves and a new launch storming the platform.

Let’s take a look at some of the biggest viewership changes that happened on Twitch last week.

The newest iteration in the Monster Hunter series, Monster Hunter Stories 2: Wings of Ruin made some of the biggest waves on Twitch with it’s explosive launch. Let’s take a look at some of its initial numbers:

Things are definitely looking strong for the game so far, especially considering all this data covers just four days, with the game releasing on July 8. If things continue as they are, we could definitely see Wings of Ruin spend some time in the Twitch spotlight.

Moving away from new releases, we saw Brawlhalla get a massive boost in viewership, skyrocketing to one of the top spots on Twitch as the sixth year of its esports scene kicked off. 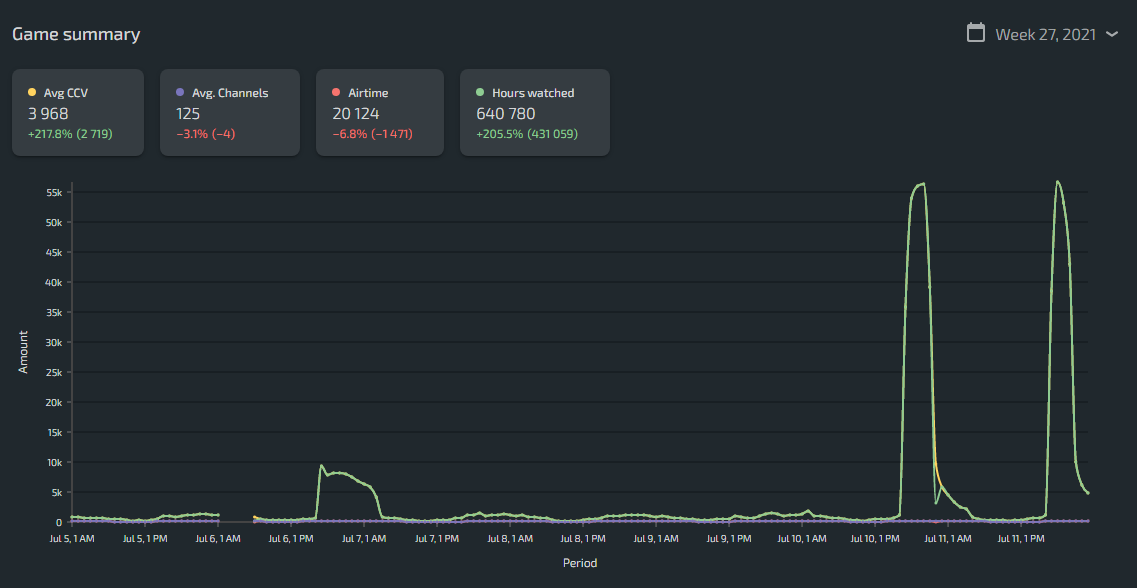 The biggest news behind these numbers are the overall increases. Hours Watched rose by 205.5%, while Average CCV increased by 217.8% - an absolutely massive rise in overall viewership! This was even backed by a fall in both Average Channels Live (-3.1%) and Airtime (-6.8%), this means there were both fewer streamers and hours spent streaming, but viewership still rose significantly!

Judging by the interest so far, the future is looking bright for Brawlhalla esports.

A blast from the past has been slowly working its way up the Twitch ladder and made some very impressive gains last week. Let’s take a look at some of Heroes of Might and Magic 3’s numbers: 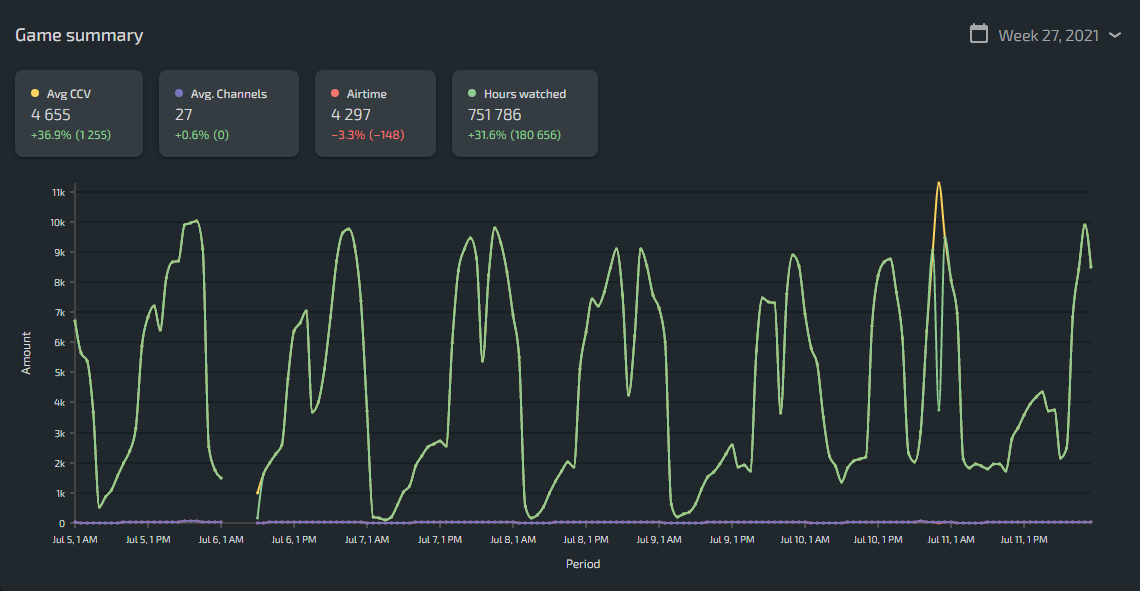 There are some very interesting numbers behind the old-school turn-based strategy game. Compared to other titles around its viewership rank, it sees much smaller peaks, but it has very consistent viewership throughout, with each day’s charts looking very similar. Overall though, it made quite big gains, with Hours Watched rising by 31.6%, while Average CCV rose by 36.9%.

This comes alongside a small 3.3% fall in Airtime, meaning there are simply more and more viewers tuning in. It seems that the game is a bit of a cult classic and has a very loyal base of fans, which is slowly drawing in more and more viewers - it will be very interesting to see how the game’s viewership progresses over the coming weeks.

It’s been a rough few weeks for Sea of Thieves, which continues to bleed viewership on Twitch. The game saw a good few weeks just a few months ago, but has since been struggling and things continue to be heading in a downwards trend: 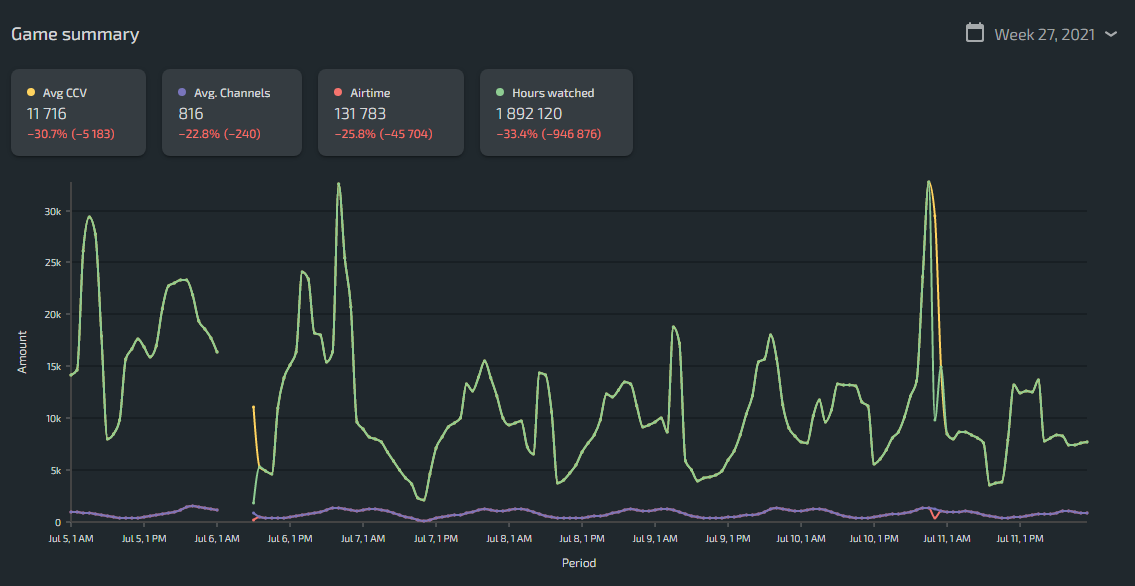 The numbers by themselves don’t look bad at all, but it’s the weekly change that tells the whole story. Hours Watched are down by 33.4%, Average CCV saw a fall of 30.7% and even Airtime and Average Channels Live are struggling, down 25.8% and 22.8% respectively.

Overall, there looks to be a mass exodus in the Sea of Thieves scene on Twitch, with viewers and streamers departing en masse. Microsoft will definitely have to take some action soon, or they may see their favorite pirate game sink.

Another game that saw a rough week is Black Desert Online. The MMO recently climbed up the Twitch rankings and is now sliding back down as it begins to lose the steam driving it forward. Let’s take a look at some of its numbers: 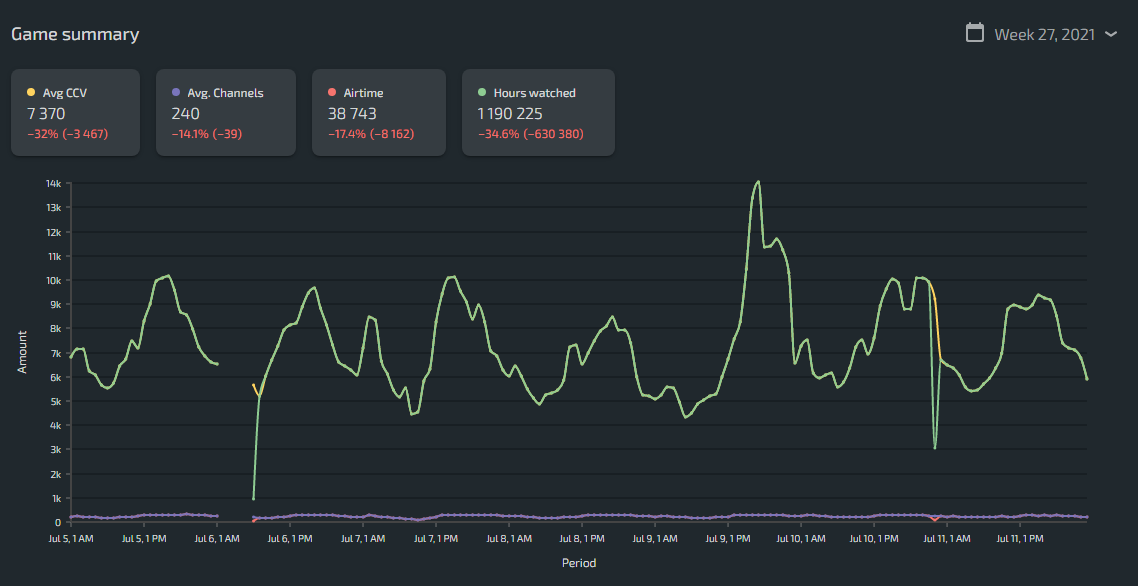 Again, it’s one where the viewership changes tell the full story. Hours Watched and Average CCV are down 34.6% and 32%, respectively, alongside a 17.4% loss in Airtime.

The numbers aren’t the biggest shock, as Black Desert is coming off of a big Twitch drops campaign and new content drop. However, it is slightly worrying how fast the viewers are dropping and there is also the question of: how many viewers can they retain?