We saw another hot week in the gaming world, with new releases aplenty and some interesting titles gaining steam on Twitch.

Let’s take a look at some of the most notable game performances on the platform last week.

The biggest news of the week is the release of Naraka: Bladepoint, an Eastern-themed Battle Royale game. Let’s take a look at its first week on Twitch: 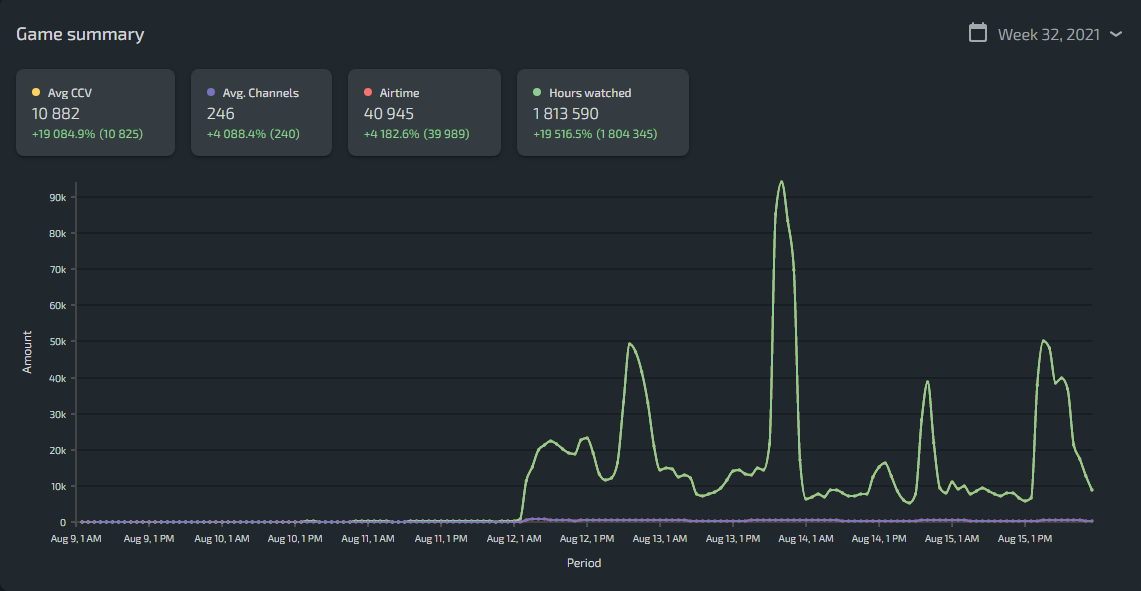 The numbers look solid for Naraka, with initial viewership driving the game to the top of Twitch. However, things have begun to slow down after the first few days of hype, so the game’s future is still up in the air.

It will be interesting to see how it does going forward, and what step 24 Entertainment take to ensure the game’s longevity on the platform.

Another new-ish game that made headlines on Twitch last week was Diablo 2: Resurrected. It is the remaster of Blizzard’s classic RPG and seems to be quite popular, even at the beta stage. 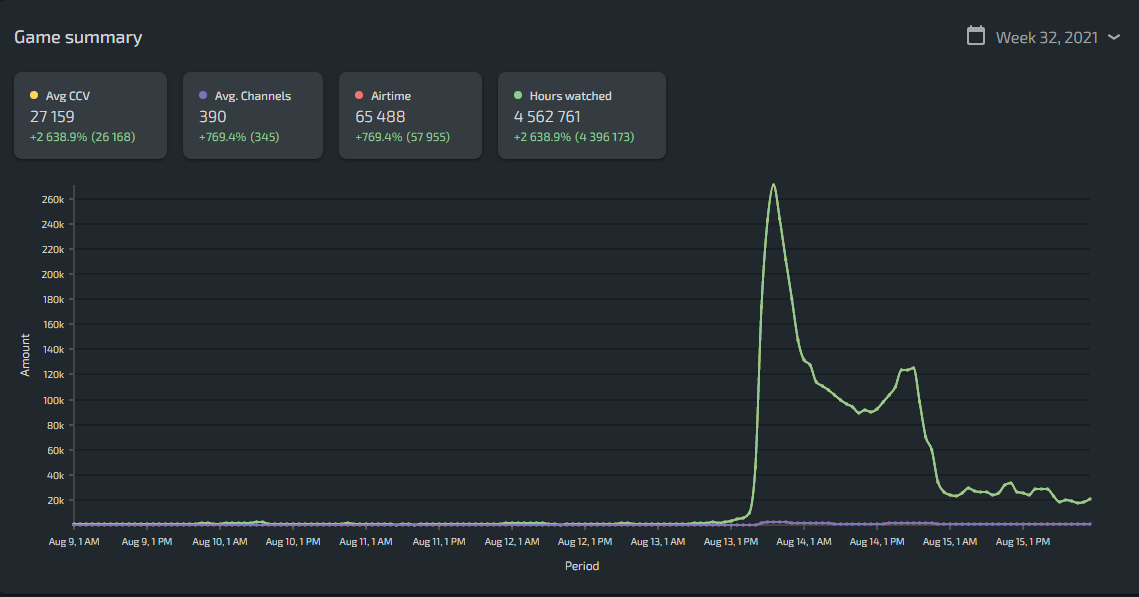 The game saw massive viewership, especially with a crazy peak of over 270,000 that likely took it to number one on the platform.

However, things have slowed down, which is expected of a beta. We’ll likely see things really pick up and get a better idea for the popularity of this remaster once the game is actually released.

One thing that may have gone under the radar is the success of Lost Ark. The game saw another very strong week and was the most viewed MMORPG on Twitch - topping even World of Warcraft and Final Fantasy XIV. Let’s take a look at its numbers: 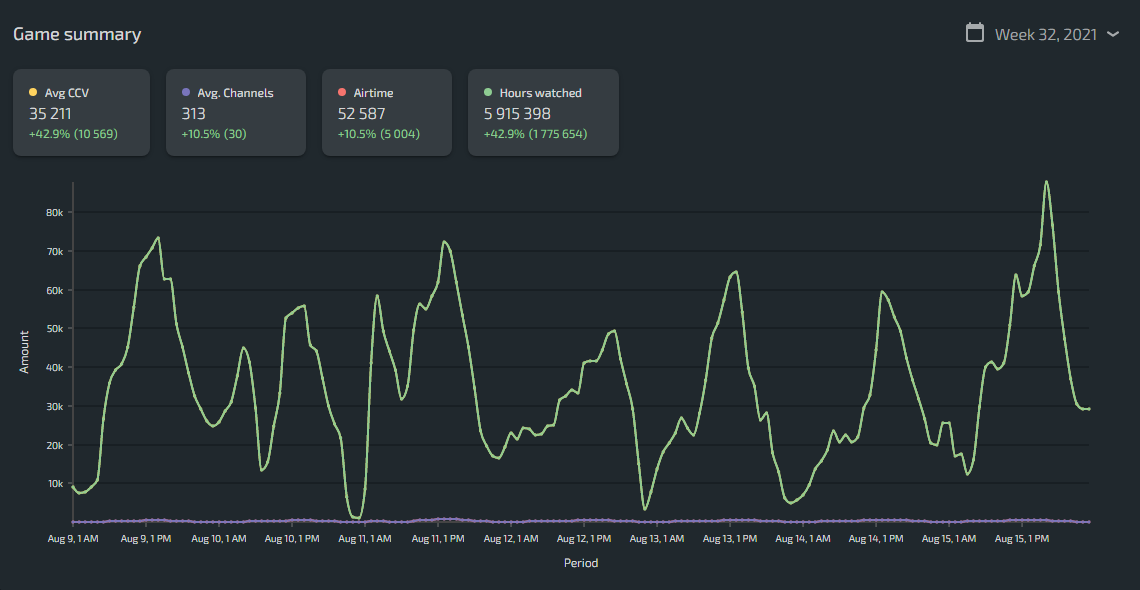 Lost Ark has been making waves, with strong all-around increases. Average CCV and Hours Watched were up 42.9% last week, while Airtime rose by only 10.5%. This means that there are both more viewers and more time spent on streaming, but the gain in viewership is much higher.

Interestingly, the top 10 channels are all Korean, meaning it’s largely the viewership of just one language spiking up the game. This is great news for the game going forward, as it already has a great base to build on for its upcoming western release.

A new type of game, powered by Cryptocurrency, has seen an explosion of popularity and is even starting to gain a foothold on Twitch. Let’s take a look at how Axie Infinity is doing: 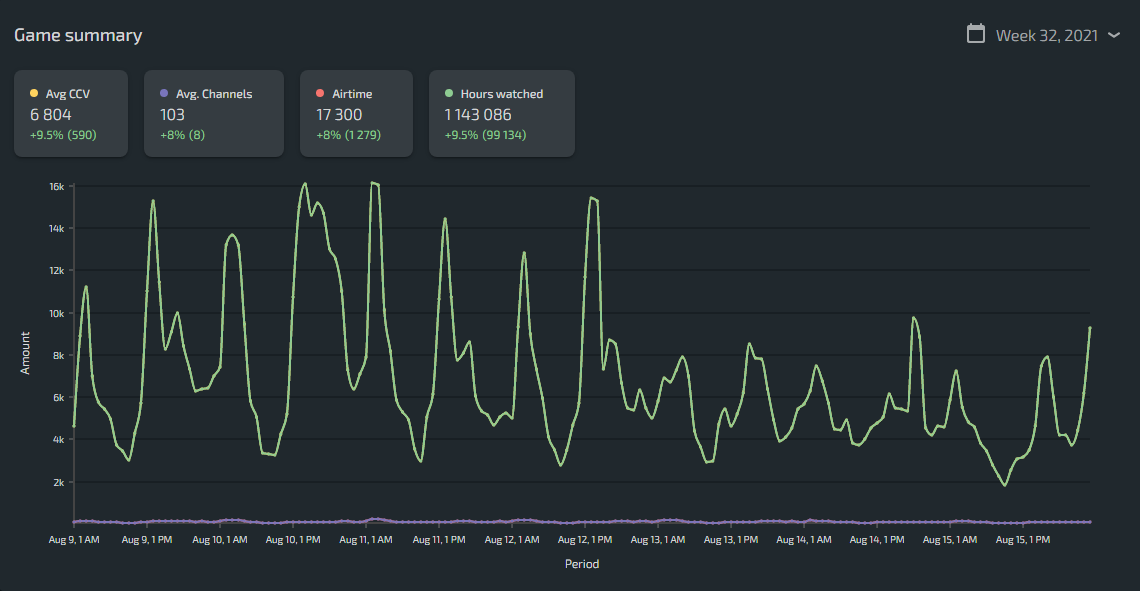 The numbers look strong and there’s definitely an overall increase. Hours Watched rose by 9.5%, while Average Channels Live and Airtime increased by 8%. This means there are both more viewers and streamers interested in Axie Infinity.

Pokémon Unite Viewership Sliced in Half

It’s not all good news on Twitch. Pokémon Unite has yet again seen its impressive viewership tumble, with the game’s numbers being essentially sliced in half: 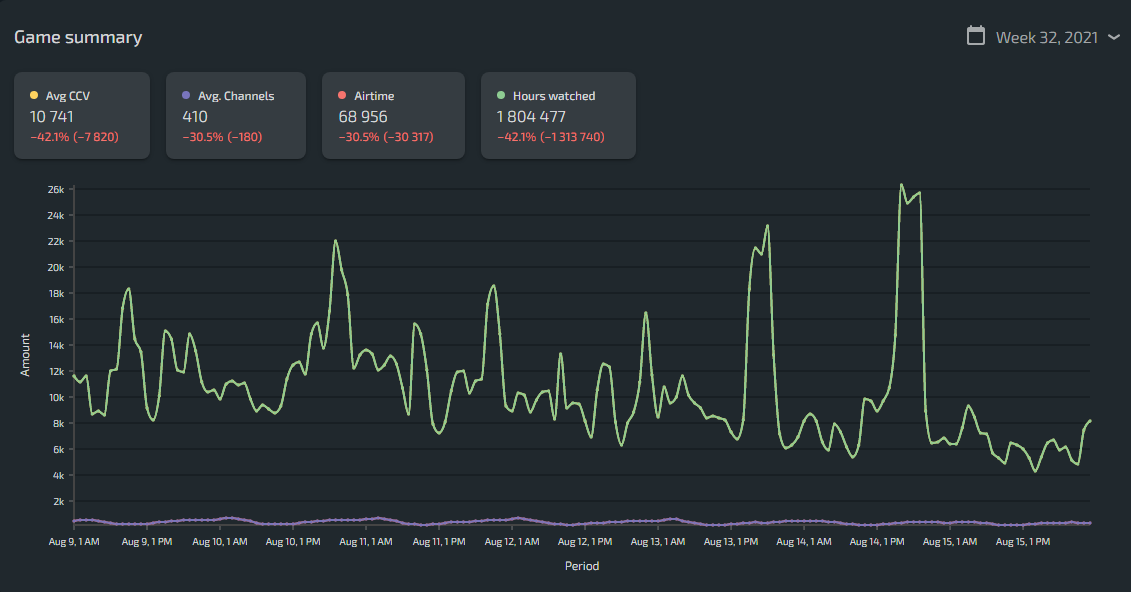 It’s losses across the board for Unite, with Average CCV and Hours Watched falling by a whopping 42.1%, while Airtime and Average Channels Live declined by 30.5%.

This means the game is losing viewership fast, with both streamers and viewers losing interest. It will be interesting to see if the developers take any steps to stem the bleeding.