We see a bit of a shakeup on Twitch in mid-February, as Esports takes center stage and viewership shuffles around quite a bit. However, things do stay consistent at the top-end, as xQc unsurprisingly keeps his crown, while Gaules and Trymacs remain the most consistent competitors.

Let’s take a look at some of the most interesting numbers behind this week’s top 10 streamers.

This week saw Esports take the Twitch spotlight, with Counter-Strike leading the way thanks to BLAST Premier Spring, and the European League of Legends Championship finally entering the top 10.

Dota 2 also returned to the top 10 after a week of absence, with the Russian stream generating the highest viewership. Let’s take a look at some of the Esports numbers this week:

The numbers point to an all-around success for Esports, with BLAST and Gaules showing the huge viewership numbers of CSGO. This was one of the first weeks in the year that saw Counter-Strike action throughout the whole week, and we’re likely to see more of the game in the top 10 as tournaments continue.

Meanwhile, the LCK was missing from the top 10 this week as the league is on a two-week break, which could explain the sudden rise of the LEC, as fans looked for alternative LoL action. It’ll be interesting to see the numbers once the LCK returns.

As is to be expected, xQc was once again found at the top of the hours watched chart and continues to be a Twitch powerhouse. He again found slight growth over the week and there looks to be no limit to his potential.

Let’s take a look at xQc’s numbers this week: 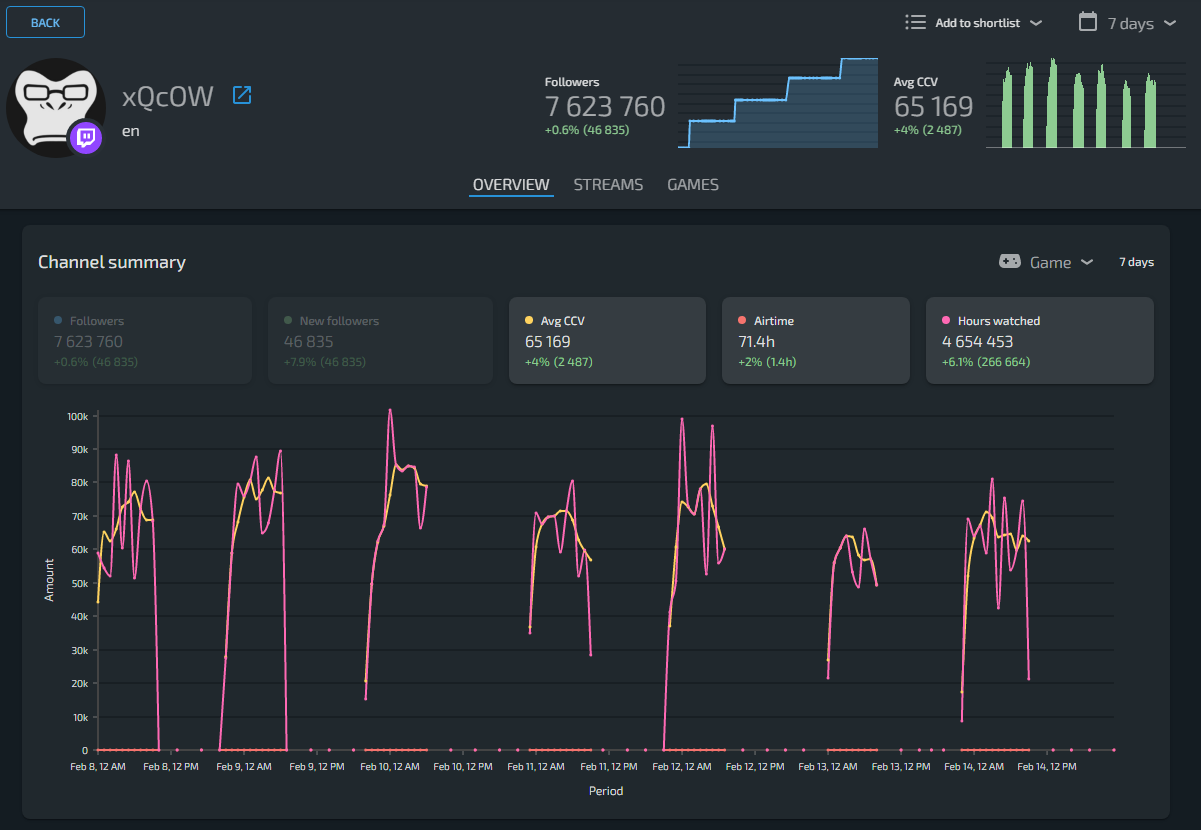 xQc once again finds himself with over 1 Million Hours Watched more than his closest rival and doesn't look to be getting dethroned anytime soon. However, with Gaules capitalizing on CSGO action, one big event could be all it takes to close the gap.

Tyler1 begins to build up steam

Tyler1 has been one of Twitch’s biggest streamers for a while, dominating the League of Legends space. He took a lengthy break coming into 2021 and returned in late January.

Since then he’s been building up again and already finds himself in sixth when it comes to Hours Watched. He’s seen some big movement in his numbers this week, and should he continue to ramp up his hours, his massive fanbase will no doubt return - making him a possible rival to xQc.

Let’s take a look at his growth so far:

The biggest factor here is his huge increase in hours watched, which relates directly to his increased airtime this week. He’s beginning to once again get into his usual hours and the consistency will definitely bring success over time.

There was a big fall in peak ccv, which seemed to come from one anomaly stream last week, rather than a consistent high. Therefore, he’s definitely one to watch in the upcoming weeks.